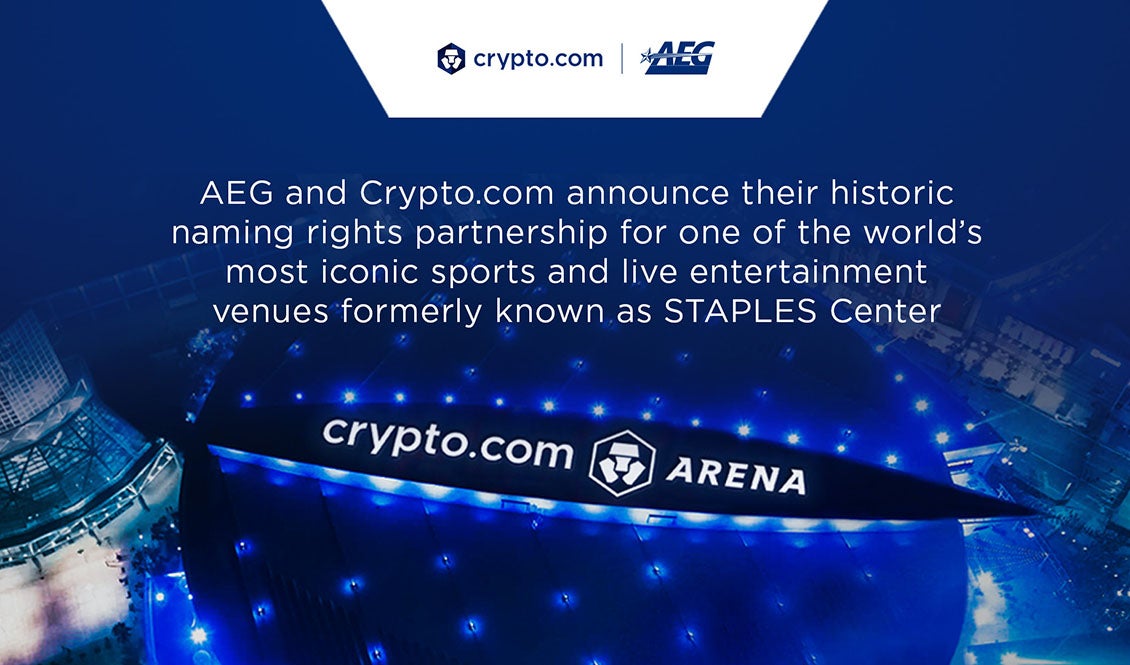 AEG AND CRYPTO.COM TO LEAD FUTURE OF THE CREATIVE CAPITAL OF THE SPORTS, MUSIC AND ENTERTAINMENT WORLD WITH NEW NAMING RIGHTS AGREEMENT FOR ICONIC LOS ANGELES VENUE FORMERLY KNOWN AS STAPLES CENTER

Recognizing these technologies will be at the forefront of powering the future of culture, creativity and entertainment in Los Angeles, AEG and Crypto.com will unveil the newly named Crypto.com Arena on Christmas Day

The new agreement includes official designations across Crypto.com Arena, L.A. LIVE, Microsoft Theater, The Novo, the Los Angeles Lakers and the LA Kings, strategically placing the fastest growing crypto platform at the forefront of the global sports and live-entertainment industry for the next 20 years

Los Angeles, November 17, 2021 — Today Crypto.com, the world’s fastest-growing cryptocurrency platform, and AEG, the world’s leading sports and live entertainment company, have launched a historic, 20-year naming rights agreement that will rename the AEG-owned and operated STAPLES Center, one of the most iconic and globally recognized sports and entertainment arenas in the world. Effective December 25, the multi-purpose arena, which hosts hundreds of annual marquee events and serves as the official home of the NBA’s Los Angeles Lakers and LA Clippers, the NHL’s LA Kings and the WNBA’s Los Angeles Sparks, will be known as Crypto.com Arena. This agreement also makes Crypto.com an official cryptocurrency platform partner of the Los Angeles Lakers and the LA Kings.

To kick off the partnership, AEG and Crypto.com will unveil the new logo and other branding assets including internal arena signage of the newly named Crypto.com Arena on Christmas Day, when the Los Angeles Lakers host the Brooklyn Nets. All of the venue’s external signage will be replaced by June 2022.

Since opening its doors in 1999, the iconic arena, located in downtown Los Angeles, has served as the backdrop to some of the most memorable and prolific sports and live entertainment moments and events to have taken place in the last 20 years and together, through this partnership, AEG and Crypto.com will help shape the next 20. Each year, the world-class venue hosts over 240 major high-profile events of national and international distinction and over 4 million guests with events ranging from professional sports, concerts, family and award shows, boxing and special events, including the GRAMMY Awards, NBA All-Star Games and NHL All-Star Games among others. It has also hosted some of the biggest headlining names and shows in music and live entertainment performing in concert and during 19 of the last 21 GRAMMY Awards shows.

This partnership, brokered by AEG Global Partnerships, places the Crypto.com brand at the center of some of the biggest and most important sports and live entertainment moments set to take place over the course of the next two decades. It also underscores the rapidly growing influence and widespread adoption of Crypto.com’s cryptocurrency platform and NFT marketplace worldwide.

“Known as the Creative Capital of the World, the city of Los Angeles and the people who call it home have always been pioneers, pushing the boundaries and innovating as the undeniable global leaders of culture and entertainment,” said Crypto.com Co-Founder and CEO, Kris Marszalek. “We’re very excited about partnering with AEG and investing long term in this city, starting with Crypto.com Arena in the heart of downtown, and using our platform in new and creative ways so that cryptocurrency can power the future of world class sports, entertainment and technology for fans in LA and around the world.”

Located in the heart of the entertainment capital of the world, the 20,000-seat, award-winning arena, has become a global symbol of excellence that has not only redefined and revitalized downtown Los Angeles, but has also helped set the industry standard for best-in-class facility management for other leading venues of prominence around the world.

“This partnership represents the fastest-growing cryptocurrency platform and the biggest sports and live entertainment company in the world converging to drive the future of sports and live entertainment as well as the incredible legacy of this arena for decades to come,” said Todd Goldstein, Chief Revenue Officer of AEG. “It marks an exciting new chapter in the history of our company and our respective industries, and we couldn’t be more thrilled to have such a visionary partner like Crypto.com supporting our global fan base and local community.”

As the exclusive naming rights partner, Crypto.com will engage millions of sports and entertainment fans each year through premium branded areas of the arena including a 3,300 sq. ft activation space at the building’s entrance, as well as dedicated activation areas on the main concourse of the arena and throughout the L.A. LIVE campus. Additionally, the new relationship will see Crypto.com featured prominently across the venue with large-scale, premium branding and signage throughout the interior and exterior of the facility.

“This partnership is about the future,” said Dan Beckerman, President and CEO of AEG.  “AEG and Crypto.com not only share a vision about innovation and the future of sports and entertainment, but we also have a shared commitment to our communities where we work and live.  We look forward to partnering with Crypto.com to create meaningful initiatives to bring that vision to life in the years to come.”

Crypto.com and AEG are committed to working in the Los Angeles community to prioritize sustainability and community engagement. AEG was one of the first companies to adopt a greenhouse reduction goal that’s based on the 1.5 ̊ C global warming limit recommended by the Intergovernmental Panel on Climate Change (IPCC). Crypto.com committed to becoming carbon negative by the end of 2022 by offsetting more carbon than is generated by all activities across the organization.

Negotiations were led on behalf of AEG by Nick Baker and Russell Silvers, Co-Chief Operating Officers of AEG Global Partnerships and on behalf of Crypto.com by Steven Kalifowitz, Chief Marketing Officer of Crypto.com and Gilad Rodkin, Senior Vice President of Marketing of Crypto.com. Both sides acknowledge that the process moved quickly to a close due to a mutual understanding of each other’s businesses and a shared desire to collaborate and create something truly unique for the future of Los Angeles and fans around the world.

Crypto.com recently partnered with Matt Damon on its first global campaign to formally introduce the platform to users (watch it here). The campaign will be integrated across Crypto.com’s portfolio of global brand partnerships including UFC, F1, Paris Saint-Germain, and the NBA’s Philadelphia 76ers, to the NHL’s Montreal Canadiens, esports team Fnatic, and Lega Serie A, the Italian Football league and Twitch Rivals. Crypto.com continues to lead the industry in sports sponsorships, as the first Official Cryptocurrency Sponsor and NFT Partner of UFC and F1®. Earlier this year, Crypto.com became the first crypto platform to partner with an F1 team, the first to partner with an NHL team (Montreal Canadiens), and the first to partner with a professional sports league (Lega Serie A).

About Crypto.com:
​​​​​​​Founded in 2016, Crypto.com today serves over 10 million customers with the world’s fastest growing crypto app, along with the Crypto.com Exchange and Crypto.com DeFi Wallet. Crypto.com NFT is the premier platform for collecting and trading NFTs, carefully curated from the worlds of art, design, entertainment and sports.

Crypto.com has focused on building a regulated business in every market where the company operates. Accordingly, Crypto.com is built on a solid foundation of security, privacy and compliance and is the first cryptocurrency company in the world to have ISO/IEC 27701:2019, CCSS Level 3, ISO27001:2013 and PCI:DSS 3.2.1, Level 1 compliance, and independently assessed at Tier 4, the highest level for both NIST Cybersecurity and Privacy Frameworks. Crypto.com also holds the industry’s largest insurance policy of $750M.

With headquarters in Singapore and over 2,600 people in offices across the Americas, Europe and Asia, Crypto.com is accelerating the world’s transition to cryptocurrency. Find out more: https://crypto.com

About AEG:
​​​​​​​Headquartered in Los Angeles, California, AEG is the world's leading sports and live entertainment company. The company operates in the following business segments: Facilities, which through its affiliation with ASM Global, owns, manages or consults with more than 300 preeminent arenas, stadiums, convention centers and performing arts venues around the world; Music through AEG Presents, which is dedicated to all aspects of live contemporary music performances, including producing and promoting global and regional concert tours, music and special events and world-renowned festivals such as the Coachella Valley Music and Arts Festival; Real Estate, which develops world-class venues, as well as major sports and entertainment districts like STAPLES Center and L.A. LIVE, Mercedes Platz in Berlin and The O2 in London; Sports, as the world's largest operator of high-profile sporting events and sports franchises including the LA Kings, LA Galaxy and Eisbären Berlin; and Global Partnerships, which oversees worldwide sales and servicing of sponsorships including naming rights, premium seating and other strategic partnerships. Through its worldwide network of venues, portfolio of powerful sports and music brands, and its integrated entertainment districts, AEG entertains more than 160 million guests annually. More information about AEG can be found at www.aegworldwide.com

About STAPLES Center:
​​​​​​​STAPLES Center has clearly established itself as the sports and entertainment center of the world. As the home of four professional sports franchises – the NBA’s Los Angeles Lakers and Los Angeles Clippers, the NHL’s Los Angeles Kings and the Los Angeles Sparks – STAPLES Center has proven to be a home court advantage for the local teams. The AEG owned and operated arena continues to distinguish itself as the host of major, high-profile events of national and international distinction including the 2004 & 2011 NBA All-Star Games, 2002 & 2017 NHL All-Star Game, 2000 Democratic National Convention, 2009 World Figure Skating Championships and 19 of the last 21 GRAMMY Awards shows. STAPLES Center’s twenty-two years have also been marked with performances and special events that brought international stature to the downtown Los Angeles venue including concerts such as Taylor Swift, Beyoncé, Prince, U2, Paul McCartney, Garth Brooks, Usher, Jay-Z, Kanye West, Keith Urban, Roger Waters, Britney Spears, Katy Perry, Ed Sheeran, Kendrick Lamar, Sade, BTS and Justin Timberlake, as well as world championship boxing, family shows and special events. Hosting over 240 events a year, the arena’s reputation for world-class amenities, features and commitment to quality of service and the guest experience is second to none. Visit STAPLES Center today at www.staplescenter.com