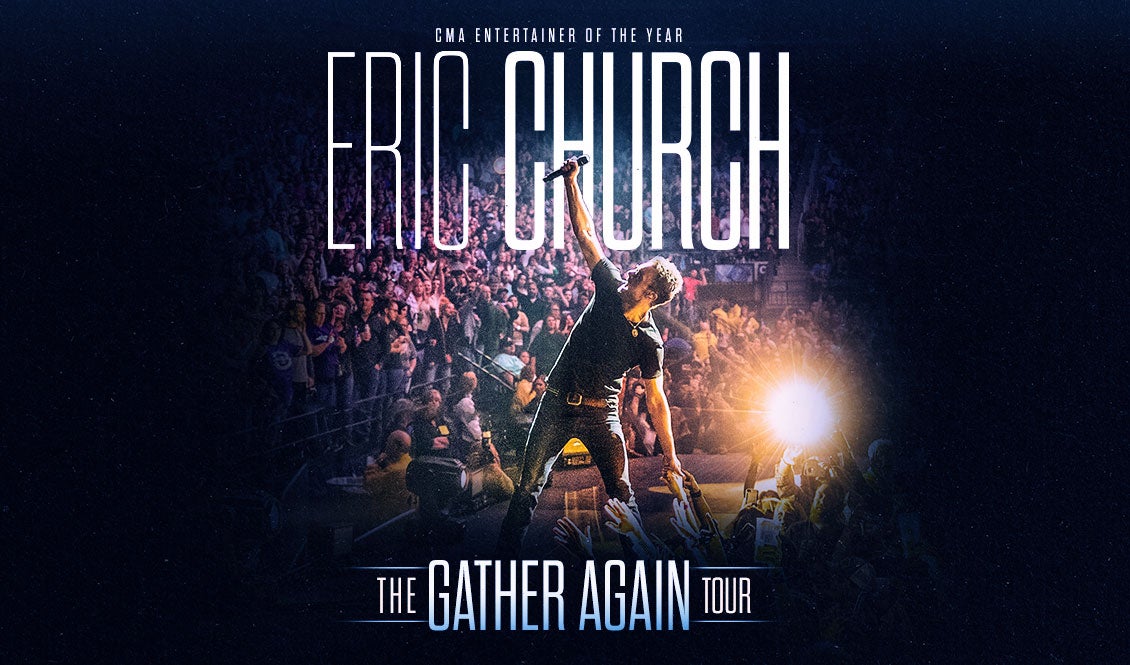 ERIC CHURCH IN THE ROUND: THE GATHER AGAIN TOUR

NASHVILLE, Tenn. – Reigning CMA Entertainer of the Year and current ACM Entertainer of the Year nominee Eric Church has his sights set on a return to the road with this morning’s announcement of a full arena tour. As first shared with the Church Choir and by Billboard magazine earlier today, The Gather Again Tour will kick off this fall and visit 55 cities throughout the U.S. and Canada, culminating at Madison Square Garden in the spring of 2022.

Making the most of the long-awaited opportunity to “gather again,” for the first time in his career Church will adopt an in-the-round set up, with the stage at the center of each arena floor in order to accommodate as many fans as possible. Tickets to all U.S. dates go on sale to the general public Friday, May 7 at 10 a.m. local time at www.EricChurch.com. Church Choir members may access tickets early via pre-sale on Tuesday, May 4 at 10 a.m. local time. On sale information for the Canadian dates will be announced soon.

Church, praised by Rolling Stone in the lead review of the April 2021 print issue for how he “has maneuvered the Nashville system, remaining dedicated to the power of down-the-center hitmaking even as he’s helped expand the parameters of the genre,” has passionately taken a leadership role in the industry’s return to touring.

“It became very clear to me that the only way to really get back to normal is through vaccinations. You’ve got to get needles in arms,” he shared with Billboard in the April 3 cover story depicting the superstar getting his own second dose of the vaccine after consulting with epidemiologists and industry experts.

“I just want to play shows,” he continued. “Politics’ job is to divide – that’s how you win elections. Those things that unite us are music and sports. The times when, whether you’re a Democrat or Republican or whatever, you throw your arm around the person next to you. We need that. I need that.”

Additionally, Church will appear in an upcoming PSA promoting vaccine education, produced by ACM Lifting Lives, The Ad Council and COVID Collaborative and set to premiere during the ACM Awards broadcast on Sunday, April 18, where Church will also perform a song off his forthcoming Heart & Soul triple album project.

Reigning CMA Entertainer of the Year and 10-time GRAMMY nominee Eric Church has spent the past year releasing new music at a relentless pace; providing a glimpse into the results of a marathon session during which he spent nearly a month writing and recording a song per day – including current Top 15 single “Hell of a View” – while sequestered in a rural North Carolina cabin, and fueling speculation of his highly anticipated new three-part project, Heart & Soul, set for release this month.

Just as unique as Church’s approach to recording and releasing music is his tenacity on the road. During his most recent outing, 2019’s Double Down Tour, Church played back-to-back nights of two unique shows in each market sans opening act, giving every city’s fans six-plus hours of his iconic music. The tour also featured a massive stop at Nissan Stadium in Nashville, where he broke the venue’s concert attendance record with more than 56,000 fans in attendance and became the first artist to sell out the venue with a solo lineup. Church also recently took to the field at Tampa Bay’s Raymond James Stadium to perform the National Anthem with R&B star Jazmine Sullivan ahead of Super Bowl LV and will return to the road for The Gather Again Tour in the fall.

A seven-time ACM Award winner, four-time CMA Award winner, and 10-time GRAMMY nominee, Church has amassed a passionate fanbase around the globe known as the Church Choir as well as a critically acclaimed catalog of music. His most recent album, Desperate Man, earned a GRAMMY nomination for Best Country Album (his third nod in the category) and produced his most recent No. 1 hit, “Some Of It.” Previous releases include the Platinum-certified Sinners Like Me (“How ’Bout You,” “Guys Like Me”), Carolina (“Smoke a Little Smoke,” “Love Your Love the Most”) and Mr. Misunderstood (“Record Year,” “Round Here Buzz”), the Double-Platinum certified The Outsiders (“Like a Wrecking Ball,” “Talladega”) and the 3x Platinum-certified Chief (“Springsteen,” “Drink In My Hand”), as well as 22 Gold, Platinum and multi-Platinum certified singles.